Gian Antonio Golin graduated in Philosophy and Letters in Padua, specialized in Architectural History in Italy first and in Paris then, where he received his master degree in architecture. Professor of Aesthetics at the Sorbonne IV in Paris, for thirty years he has had pledged to cooperate with the Fondo per l’Ambiente Italiano (FAI) and now he’s directing A.R.P.A.I (Associazione per il Restauro del Patrimonio Artistico Italiano). Personal exhibition in Luxembourg, Germany, Netherlands, France, Austria, Italy.

He started a career as a teacher and lecturer who has led him to collaborate with the International Centre of Architecture in Vicenza, with the University of Miami for the seminars in Italy and with the Sorbonne and various museums (Musée des Arts Décoratifs, Musée de l’Homme, the Budé Foundation, Ecole du Louvre and many other cultural institutions in France).

Soon started to write for magazines and books, mainly on issues about architecture and particularly on relations between the French Neoclassicism and the legacy of the culture left by Palladio.

For his training was crucial the collaboration with the great director Frédéric Rossif and Jean Charles Cuttoli, his assistant, for preliminary research on preparing several documentary films focused on landscape, arts and culture.

Around twenty years, he began his experience with painting competitions in Italy, with the international exhibitions later, first in Luxembourg, than in Germany and Belgium. They were paintings of a young rookie who was acquired by European and American collectors.

He never stopped painting but until recently it was almost a secret chapter of his life, a wing accessible but “contained”, of his introspection.

In the following twenty five years he has traveled and now he still runs cultural trail in almost all over the world for FAI, Le Monde et Son Histoire in Paris, for l’Ecole des Arts et Metiers, Hecate, les Amis de Beaubourg, for the American Friends of FAI, for Venetian Heritage, for UNESCO.

The conservation of the artistic Italian heritage engages him as director of ARPAI (Associazione per il Restauro del Patrimonio Artistico Italiano) that came from the World Monuments Fund.

He lives in Paris and Vicenza, with his children Federico and Edoardo, who are the salt of his earth and Marina in his heart.

As soon as is possible he take refuge in Corsica to meditate in his garden in the shelter of red rocks, in the fragrance of myrtle and rosemary, with an eye between sky and sea. 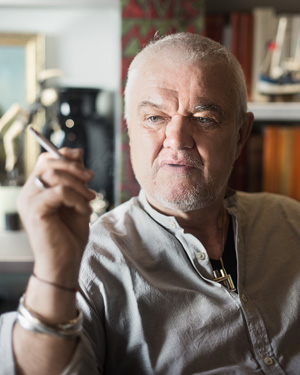